Invisible Shield screen protectors by ZAGG are best known for being made of a material created by the military to protect helicopter blades from wear and tear.

Want to protect your iPhone 4 screen?
Buy InvisibleShield for iPhone 4.

If it can protect a helicopter blade, you would think it could protect my glass iPhone display effortlessly, right?

Eager to test an iPhone Invisible Shield’s durability for myself, I e-mailed Shield Zone and asked if they’d donate one of their screen protectors for me to review, fairly and honestly.

They agreed. So I received the ShieldZone package 4 days ago and applied the Invisible Shield to my iPhone right away. I considered how easy it was to apply, its attractiveness, and of course, its ability to withstand scuffs and scratches.

See how it fared in my iPhone Invisible Shield review after the jump: 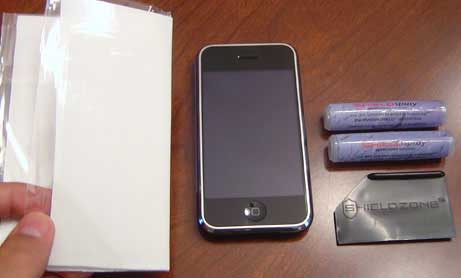 The contents of the Shield Zone package included:

To apply the Invisible Shield, you spray both sides of the film with ShieldSpray and then plop the screen protector onto your iPhone’s display.

The instructions tell you to do this in a lint-free area. I cannot emphasize this requirement enough. Even in a clean environment, I found it very challenging to keep at least some lint out from between the shield and the iPhone display.

It’s not feasible to remove the lint after the Invisible Shield has already been applied — trust me, I went through an entire ShieldSpray bottle trying. So I tried a different strategy.

Because the film can be removed and reapplied, I removed it and, instead of using ShieldSpray (which seems basically like a soap & water solution), I held the screen protector under the faucet and rinsed it well with tap water, getting rid of all the lint. 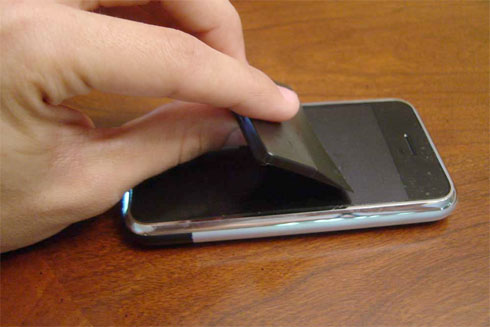 After letting excess water drip off the film, I had no problem applying it to the iPhone display.

The included squeegee works well for ironing out most air pockets. The instructions say to give any remaining “microbubbles” 2-3 days, but after nearly 4 I’ve still got a small, centimeter-wide cluster of speck-sized bubbles.

If you’re a nit-picky person, tiny microbubbles like these might drive you nuts, but the less obsessed will find they’re barely noticeable. The air bubbles are most apparent when you’re in an application with a white background (scrolling through Contacts, for example), where they appear as tiny light-gray specks. This was just my case, though; you might get lucky and not have to deal with bubbles at all.

While my bare iPhone display used to be a visible mess after even the shortest tasks, fingerprints and smudges on the InvisibleShield are far less noticeable.

Because of the film’s rubber-like texture, there’s a trivial amount of added resistance when you move your finger across the touchscreen. The difference is negligible, though, and certainly not enough to impair the iPhone’s touch sensors.

One benefit of the Invisible Shield’s rubbery feel — particularly on the back — is that it gives you a better grip on the iPhone, making it less likely that you’ll drop it.

Both the front and back films fit the iPhone precisely. The Invisible Shield is actually not invisible if you look closely, but most people who come across your iPhone probably won’t notice it’s there. 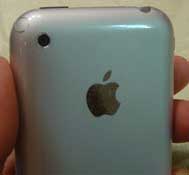 Invisible Shield for Back of iPhone

The back Invisible Shield film was, as opposed to the front, a challenge to apply. Initially, I had trouble getting the edges to stick to the rounded corners of the iPhone. The best way to do it, I discovered, is to hold down the film on each corner for about 30 seconds. After doing that, the back film stuck well and didn’t become undone, even after lots of time in my pocket.

Tip: If you have an InvisibleShield and can’t get rid of annoying air pockets around the edges of your iPhone, simply lift up the edge and add a drop of water to the Invisible Shield. Then hold down that part of the film for 30 seconds in the position you’d like it to stay.

Once you’ve got the back shield on correctly, you’ll be amazed at how well it conforms to the iPhone’s rounded edges.

To test the iPhone InvisibleShield’s durability, first I swiped it vigorously with a key. 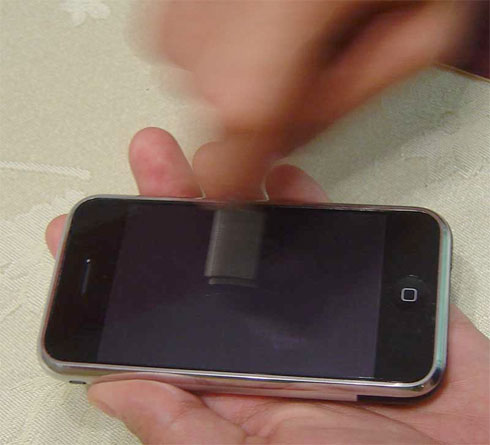 Then I used a knife. 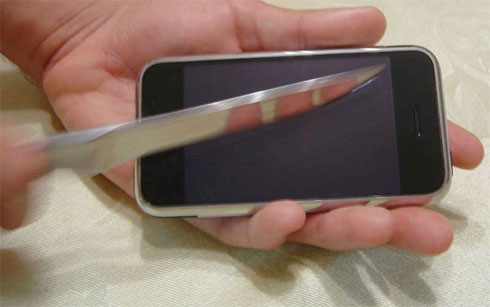 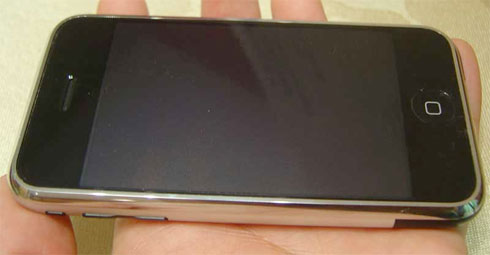 iPhone’s glass display is pretty scratch-resistant on its own, according to a recent PC World experiment, but because the Invisible Shield is hardly noticeable, it may be worth buying simply for the peace of mind.

I’ve replaced my Incase protective cover with the Invisible Shield because it’s nice to be able to enjoy my iPhone’s sleek look and feel, which most iPhone cases don’t allow for.

What’s good about the Invisible Shield?

What are its downsides?