As a huge Seinfeld fan, I am excited about the news that Seinfeld is now on iPhone via Sony’s Crackle app, which is available free in the App Store. The Crackle app lets you stream multiple television shows, one of which is Seinfeld. 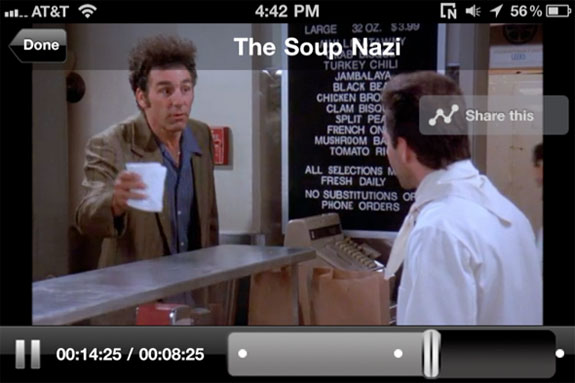 Currently, Crackle has ten Seinfeld episodes from several seasons. All the episodes are free to stream:

Like most free TV streaming services, Crackle is ad-supported. Each episode begins with a 15-second commercial followed by a few 15 to 30-second ads throughout the episode.

Of all the shows on Crackle, Seinfeld is in my opinion the only one worth watching, though I’m not much of a TV watcher. The other shows are The Jackie Chan Adventures, Why it Crackles, The Killing, Kidnapped, The Big Guy and Rusty the Boy Robot, Married With Children, Jailbait, News Radio, The Tick, Starsky and Hutch, Roughnecks, 10 Items or Less, Samurai X, Charlie’s Angels, Held Up, Backwash, and Hot Hot Los Angeles.

Crackle also lets you watch a handful of movies, the most notable of which include Reign Over Me, Big Daddy, Ghostbusters and The Da Vinci Code.

Are you excited about Seinfeld on iPhone? Are there any other television streaming apps for iPhone that you would recommend?