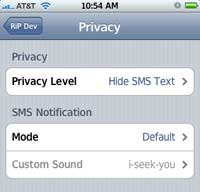 Update: The SMS Preview privacy issue is now resolved as of the iPhone 3.0 software update.

SMS Preview — the iPhone feature that interrupts what you’re doing to display an excerpt of an incoming text message on your screen — has been a privacy concern of mine since the iPhone was released last June. Now RiP Dev, a third-party development team, has released a solution.

By the way, I’m not the only one concerned about SMS Preview. When I asked how iPhone’s SMS Preview has gotten you into trouble, a number of you responded with stories of embarrassing situations you’ve been put in because of text messages popping up while other people were using your iPhones.

One notable story, from a commenter with the alias “Nyprg”:

A friend and I were texting back and forth about stuff while I was shopping with another girl friend of mine. The girl I was with asked to use my phone to look up something on the internet while I changed. When I came out the dressing room, she looked hurt and on the verge of tears! I later found out that while I was dressing, the girl I was texting started writing about the girl I was with and it was kind of cruel. Needless to say I got in huge arguements from both girls over that!

Although I posted about a sort of solution to turning off SMS Preview last August, the method is not reliable and it requires you to set a tedious Passcode Lock on your iPhone.

Unbelievably, despite the overwhelming public interest in this privacy issue, Apple has yet to do anything to address the SMS Preview problem.

The answer is simple: issue a firmware update with the option to customize SMS notification settings. So what are they waiting for?

I was happy to hear from a reader, apparently a blogger from Limited Edition iPhone, that the RiP Dev team has taken the matter into its own hands and created a software called Caterpillar (now called Kate) that lets you adjust iPhone’s SMS privacy settings (among other things).

The Kate app is available on a subscription basis only — $20 for 6 months, $35 for a year or $45 for unlimited use — and requires a Jailbroken iPhone, but the Privacy Level feature solves the SMS Preview problem and might be worth paying for if you are particularly concerned about this issue.

I purchased a 6-month subscription so I could test out Kate’s Privacy settings for this review.

After installing Kate, the app creates a RiP Dev menu in the iPhone’s Settings that allows you to tweak your Privacy Level. 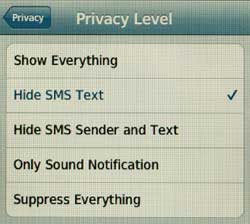 This is what an incoming text message looks like when you choose to “Hide SMS Sender and Text”:

Additionally, you can adjust the SMS notification mode to: Default, Silent, Vibration Only, or select a custom sound.

If text message privacy on the iPhone is a concern for you, you might want to purchase a subscription to the Kate app. The software also has other cool features, which I’ll review in an upcoming article.