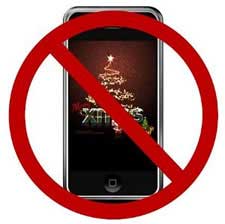 You don’t need me to convince you the iPhone is a good holiday gift. You’ve heard from Apple about the iPhone’s many supernatural capabilities. Some of them are TRUE — I know first-hand, I’m an iPhone owner. But be not fooled, the iPhone is not all fun & games.

Consider these 7 reasons NOT to buy an iPhone this holiday season:

Is the iPhone all its cut out to be? Would you recommend it as a holiday gift? Let us know what you think.