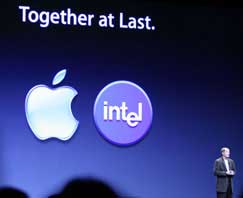 It looked like Intel and Apple were becoming pals, with Intel offering Apple its Core Duo processors for the Mac and even praising the iPhone.

But now Intel said it will be producing cell phone chips that will be marketed to phone manufacturers other than Apple.

On the one hand it looks like Apple’s been stabbed in the back. On the other it seems we consumers are going to have a lot more options in the market next to the iPhone, followed by a better iPhone v2.0 (competition- always a good thing).

2 thoughts on “Intel to Produce Chips for iPhone Competitors”