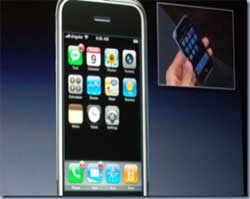 Apparently it’s an “open secret in the industry” that German cell phone parts manufacturer Balda is producing iPhone’s touch screens, said BusinessWeek in the future (don’t ask me why the article is dated April 16, 2007).

But last year Balda laid off 70% of its workforce and ended the year with a 13% loss of sales. So why would Apple choose them to build the iPhone touchscreens?

Because the German company, which used to make plastic cell phone shells, recently struck a hot deal with a Chinese touchscreens producer to make “glass-surfaced screens that are far more sensitive, thinner, and harder to scratch or smudge than the plastic displays that now dominate,” said BusinessWeek.

The new touch screens are the only ones known to be compatible with Apple’s patented “multitouch” technology, which is why there’s little doubt that Apple is teaming with Balda to work on the iPhone.

You can say bye-bye to bankruptcy, Balda.