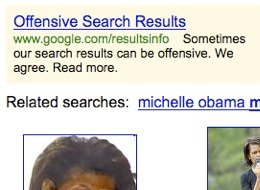 News broke yesterday about a controversial image that turns up at the top of Google’s search results when you type in the name of the First Lady of the United States. The image in question is a caricature of Michelle Obama that is crude and disrespectful, to say the least. However, what is more notable than the image itself is the way Google has handled the situation, and how Apple could learn from the search giant with regards to controversial content in the iTunes App Store.

Google Says ‘No’ to Censorship

Google will not remove the offensive image from its search results. Why? “It’s offensive to many people, but that alone is not a reason to remove it from our search index,” Google Inc. spokesman Scott Rubin said Tuesday, according to the LA Times.

That’s right. Google recognizes that it cannot police the Internet, so it will not remove the distasteful image of Michelle Obama, or any other distasteful image, unless it is illegal, against Google guidelines, or a threat to someone’s life or safety. Instead, Google has placed a house advertisement above the search results for the image and explained their position in a letter.

“We assure you that the views expressed by such sites are not in any way endorsed by Google [but] … we have, in general, a bias toward free speech.”

What Could Apple Learn from Google?

I agree with Google on this one. Although the caricature of Michelle is tasteless, Google is not in any position to judge its appropriateness. Google knows it is not the moral police, so it leaves search engine rankings up to its algorithms. They take the same approach to the Android Market, which they do not police either.

Now, compare Google to Apple in a similar situation: When a tasteless or offensive iPhone app turns up on the App Store waiting list, what does Apple do? They reject it.

As a result, iPhone developers and users are left infuriated with heinous App Store approval policies. We point out the hypocrisy of rejecting one app, but including a similar one. We accuse Apple of censorship and overbearing behavior. We abandon Apple’s iPhone and adopt Google’s Android.

There are many compelling reasons for Apple to reform its App Store approval process and do away with content policing. As more and more apps flood the App Store, determining which are inappropriate will become increasingly difficult, and increasingly expensive. App Store reform is in the best interests of iPhone users, iPhone developers, and Apple.

Was Google right to leave the controversial First Lady caricature in place? Should Apple learn from the search engine and adopt a similar, hands-off approach to the App Store? What do you think?

Update: The offensive image has been removed, not by Google, but by the website that had hosted it.