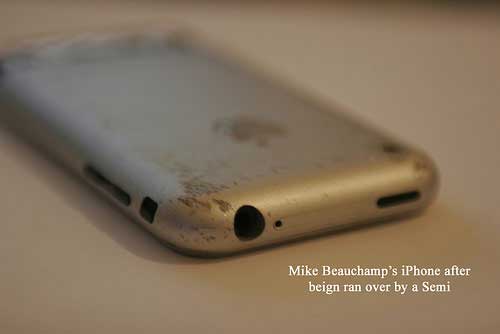 I was filling my car up with gas in the sharp cold gusting winds we’ve had here in Kansas lately. I had on a light jacket and as I was getting out of the car to go around and begin pumping, I figured I’d put on my heavy winter coat. I took my phone out of my lightweight jacket and set it on the trunk of my car and switched to my heavier coat. I went inside to prepay for gas, forgetting all about my phone. When I came back out, I pumped my gas, walked around the front of my car, got back in and drove off.

I was traveling down the interstate when this happened. The gas station I stopped at was a little rest area in the middle of the turnpike. So as I left, I merged back onto the highway, accelerated hard, turned up the stereo, and got moving. About 5 minutes later, I reached for my phone, but couldn’t feel it. Then it hit me. I’d forgotten to grab it off the back of my car when I was filling up at the gas station. A feeling of panic and anger washed over me instantly and I started screaming and yelling in my empty car. Because I was driving on a toll-road, there was no way to turn around and just go back. I had to drive another 15 miles to the next exit, pay my toll, get back on the highway, and race the 20 miles back to the rest stop.

I pulled back up to the pump I filled up at but there was no sign of my phone. I remembered a lady filling up next to me in a silver BMW – but she was long gone. My first move was to go inside and ask if she or anyone else had turned it in. No such luck. I scoured the parking lot and on-ramp I used to get back on the highway – no sign of the phone anywhere. After about 30 minutes of searching, I finally gave up. It was 11pm and it was 19 degrees outside. I was exhausted, cold, angry, frustrated, and just decided I’d have to start using the Treo 750 I had as a backup.

As I slowly merged back onto the highway, I kept my eyes open for the remote possibility that the phone had stayed on my car for a longer distance than what I’d searched on foot. Still, no luck. I got up to speed, giving up for good, and about that time (1/4 mile from the gas station) I saw a glimmering light from the lane next to me. As I sped past the object, I knew it was my phone – still alive and working! I slammed on the brakes and pulled over, waiting for the passing cars and trucks to go by so I could run across 2 lanes of 75mph traffic to retrieve my poor phone. As the last pair of headlights approached, the semi got over to the far outside lane because he saw me standing on the side of the road. I knew this was trouble. As I watched helplessly from the shoulder, the semi plowed my phone at full speed, throwing it to the ditch on the other side of the highway. At this point, I figured I’d retrieve it just for the purpose of seeing the crushed iPhone in disarray, mangled and crunched lifeless in the grass.

Much to my surprise, as I approached, I heard the familiar sound of my ringtone — the iPhone was alive and ringing! As I picked it up and cradled it gently in my hands, I saw the screen displaying my caller ID — the screen still worked! I slid my finger gently over the answer slide and paused as I held the tattered and torn device to my ear — my heart must have skipped a beat when I heard my mom’s voice at the other end of the phone — the phone still worked!

I ran back to my car and sat on the side of the road for about 15 minutes inspecting it, testing it, and looking it over — how in the hell had it survived being trounced by an 18-wheeler at 70mph?!?

One day later as I’m writing this, I don’t have an answer to that question. It makes and receives calls, sends and receives text messages, browses the internet, plays music from the iPod feature, connects to my wi-fi network, syncs with my computer, and charges the battery. The camera even takes perfect pictures still!

I’ve spoken with Apple’s customer relations department – they’re interested in using it in an iPhone commercial; I mean come on, this is the ultimate crash and durability test out there! I’ve banged this phone up many times since I bought it the day they were released last June. I’ve dropped it down a flight of concrete stairs, slid it across a parking lot, dropped it on cement, and even partially submerged it in water and this little phone just keeps truckin!

There are a few bad spots on the display now, but the screen is still responsive to touch in those bad areas! The glass covering the screen doesn’t have a mark on it – I have no idea how. The phone would have first had to topple off the back of my car and based on where I found it, I’d have been going well over 60mph when it fell off — that alone would kill most phones. But then being ran over by a semi — I don’t know what to say! I know that approximately 1 hour went by between the time I knew I lost it and the time I recovered it — who knows what else happened to it during that time. When the semi ran over it, the phone was sitting dead in the middle of one of the lanes — it wouldn’t be too hard to imagine it getting hit more than the one time I witnessed!

I’m here to tell you — if you’re hard on your phones, if you’re a power user, if you depend on its strength, reliability, and durability —- you need an iphone! I’ve always been a Blackberry owner,but the first time I dropped it on a sidewalk, the screen was toast – just came on blank white — completely useless. This iPhone has been put through more hell than any crash test could put it through — and with the exception of the obvious scratches on the back on the small dead spots on the screen, its amazing! None of the damage actually effects the functionality or performance of the phone. I don’t know what else to do to break this thing if I wanted to, short of putting a bullet through it or smashing it with a sledge hammer – but you don’t purposefully try to destroy your phone on a daily basis anyway. I think this was the ultimate real world testament to the iPhone.

I would love to see Apple produce an iPhone commercial with this story. 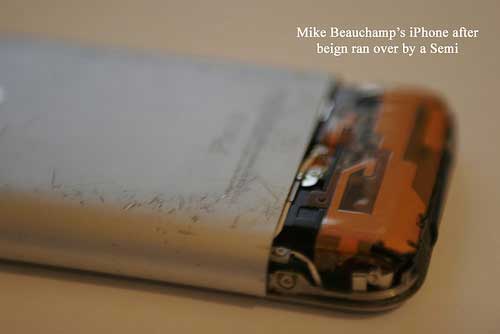 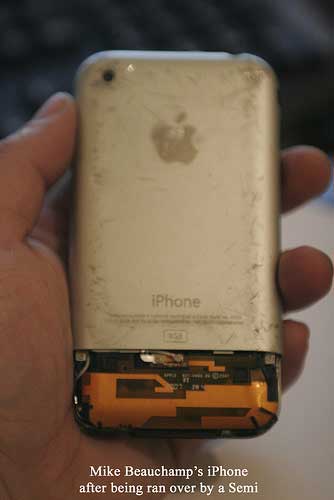