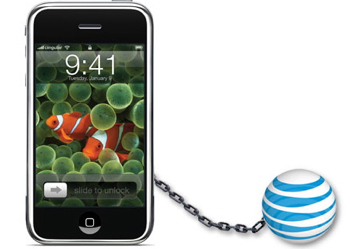 Thought unlimited data on your iPhone was too good to be true? It is now. AT&T has removed the option of unlimited data for smart phones and will begin charging new users based on how much data they use.

This sucks if you ask me. Part of the magic of having an iPhone is the ability to do anything at any time without having to worry about data charges. Now, iPhone users will be forced to pay more to ration their data use, instead of AT&T paying more to upgrade its damn network already. What’s more, US iPhone users don’t have the choice to switch to another carrier because of AT&T and Apple’s exclusivity deal. This is not progress, it is regress, as Cult of Mac writer John Brownlee accurately points out:

&%$@ you, AT&T. Has there ever been a more worthless telecom? After three full years of supplying terrible service to their iDevice customers and skimping at every turn on using their profit from iPhone contracts to substantially improve their 3G networks, they’re now raising prices for inferior service. — Opinion: AT&T’s New Data Plans Make iPhone Look Worse Than Android

Time to go to Android on Verizon, where you can get unlimited data for $29.99. Either that or jailbreak/unlock your iPhone and use another carrier.

Does it bother you that AT&T has removed the unlimited data plan for iPhone? Is it enough to make you switch to Android? Let me know what you think in the comments.

3 thoughts on “No More Unlimited Data for iPhone on AT&T: Does it Tick You Off?”