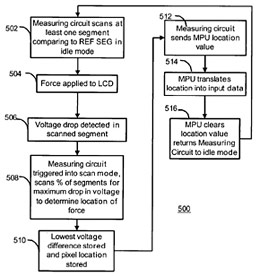 A Research in Motion (RIM) patent application points to the possibility of a touchscreen BlackBerry in the near future.

Because the patent application was published only four months after it was filed, as opposed to the typical 18-month waiting period, it’s possible that the production of a touchscreen BlackBerry could be right on the horizon.

The first line of the patent’s abstract reads:

Could it be a fake?

A commenter on ZDNet suggests that RIM could just be “spin doctoring” in an attempt to throw off its competitor, Apple.

Would RIM really want to make a touchscreen BlackBerry? Many of the BlackBerry owners I know say they prefer their hardware keyboards as opposed to iPhone’s virtual keyboard.

Some people just dont like the lack of tactile feedback on the iPhone, whether it’s because they have pudgier fingers or because it’s harder to text without looking.

BlackBerry’s edge over iPhone is that it can cater to those customers who prefer traditional hardware on their phones. If RIM were to venture into Apple’s touchscreen territory, they might alienate those customers who like their classic keyboards, and then they’d have to compete with Apple head-on.

Is a touchscreen BlackBerry imminent?

ZDNet’s Russell Shaw thinks so, but I’m not quite sure.

What do you think? Will RIM make a touchscreen BlackBerry? I’d be interested to read your opinion in the comments.

1 thought on “Touchscreen BlackBerry to Take On iPhone?”