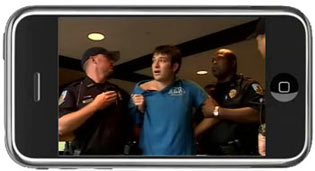 By now, many of you have heard of Andrew Meyer, the University of Florida student who was shocked with a Taser by police at a UF question-and-answer session with Senator John Kerry. My intention is not to discuss whether the officers crossed the line or not, but to point out the power of the Internet video revolution (i.e. YouTube) in spreading a story like this, and to question why Apple is not participating in it with the iPhone.

Multiple people recorded the brawl, both on standalone and mobile phone video cameras, and posted the videos on YouTube for the world to see. It’s arguable that this would not have become a national (not to mention global) story had YouTube not facilitated its spread.

The UF taser incident shows us that online video can be a highly effective tool for maintaining democracy… so why does the iPhone not have a video camera?

For a phone that prides itself on being so “revolutionary,” the iPhone is hindered by its inability to record video. As a UF student, I can’t help but imagine the situation had I been at the Kerry speech. The guy next to me with the Motorola Razr would be recording the whole ordeal, and I’d be standing there with my shiny new iPhone taking blurry photos at best.

Apple, the times they are a-changin’. Let’s get a video camera on the iPhone.