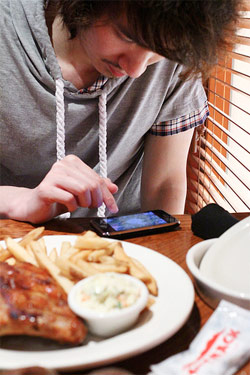 I remember when I was a kid and my teenage sister got a T-Mobile Sidekick. It was the first “smartphone” I had ever heard about, and I was always impressed (and kind of jealous) by how she could chat with her friends on it and check her email all the time.

My parents, on the other hand, may have regretted buying my sister the Sidekick, because she was always glued to it, even at dinnertime.

“Get off that thing now!” my father would scold her when she’d be constantly clicking away on the Sidekick keyboard, messaging back and forth with her friends even when we were supposed to be having “family bonding time.”

I always thought it was kind of rude of my sister, too… until I got an iPhone.

The Dawn of the iPhone

The first couple of years after the iPhone was introduced marked the first time that people had full-fledged computers in their pockets. Yes, there were Blackberry phones and mobile browsers, but let’s be honest: nothing like the iPhone, at least nothing that was widely adopted.

All of a sudden, people had access to advanced mobile technologies and all of the information in the world literally at our fingertips, whenever we wanted it. The iPhone changed our society.

As an early adopter of the iPhone, I had a lot of fun using my iPhone to take advantage of social situations. For example, when an argument would ensue about which Hollywood movie grossed the most last year, I would sneak on my iPhone, find out the answer, and act like I was just that intelligent.

Nowadays, using a smartphone in public is common. So many people have one. The problem is that as mobile technology advances and becomes more widely accessible, we now have a responsibility to moderate our mobile habit so that it doesn’t get in the way of our social lives.

Using Your iPhone in Public

I am accustomed to pulling out my iPhone from time to time in social situations, either to check something regarding my own personal life (a text message, an email, a Facebook message) or to enhance a conversation. For example, the other night my friends and I were recalling a childhood cartoon and I pulled out my iPhone to search for an image of said cartoon and show it to them.

But recently, a friend called me out for using my iPhone in a social situation.

“It takes you out of the moment,” she argued. “And it’s just kind of rude.”

I could see where she was coming from, especially because I’ve been in the position where I am talking to someone and they rudely pull out their phones and interrupt the situation.

On the one hand, it’s a wonderful luxury to be able to connect with your social network (answer phone calls, reply to Facebook wall posts, respond to text messages, etc.) on the go. On the other hand, it can be kind of rude to ignore the people you are with in favor of your iPhone.

Which brings me to the big question…

Is It Rude to Use Your iPhone in Public?

To what extent is it permissible to use your iPhone in social situations? Are we being rude by pulling out our iPhones when we are out with friends, at the cash register, at the dinner table, etc.?

Society is changing so quickly because of smartphone technology, so we now have a responsibility to figure out how to moderate our iPhone use.

What do you think? When it comes to using your iPhone in public, how much is too much? I would love to hear your opinion in the comments.