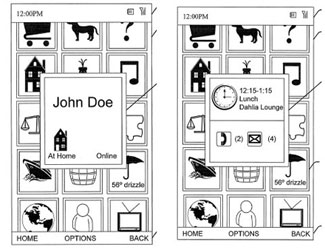 This post needn’t be lengthy because the concept image of the interface on Microsoft’s possibly upcoming Zune phone speaks for itself.

The image is from a patent filed by Microsoft last June, so I’m not suggesting that Microsoft borrowed the icons-on-a- touchscreen concept from Apple.

Wired thinks it’s simply a matter of “some ideas seem to have their time and pop up in different places simultaneously, just like the TV which popped up independently on both sides of the Atlantic at the same time.”

But nevermind that. Just look at that interface. It’s testament to the lack of style and sense of aesthetics in the folks at Microsoft (see also: Zune media player).

If some analysts are saying the iPhone will fail, what will they have to say about the Zune phone?

Of course I could be wrong entirely and that image could be a verrry basic mock-up of a killer interface that Microsoft doesn’t want us to see yet. But I’m not banking on that theory.