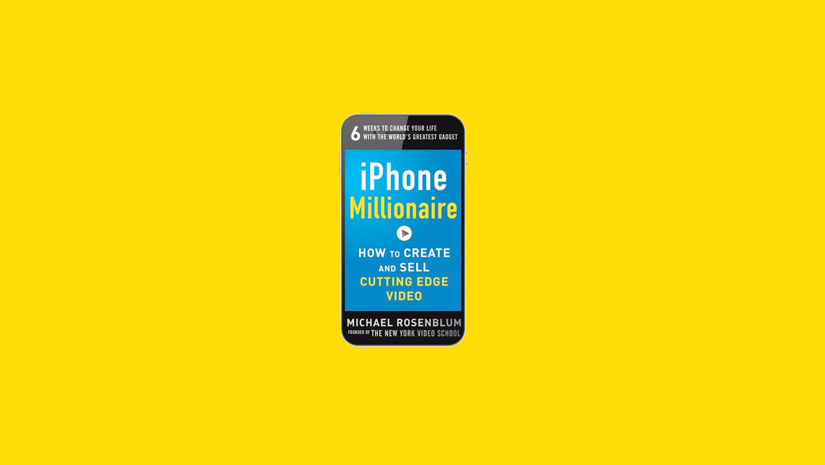 As I was surfing Amazon last night, I came across this book that has me intrigued: iPhone Millionaire, a new publication that promises to “Change Your Life With the World’s Greatest Gadget” in as little as six weeks. The book teaches “how to create and sell cutting edge video” using nothing but the iPhone.

Aside from the obvious appeal of the “millionaire” title, what compels me about this book is the idea of democratization of technology that the author talks about.

Michael Rosenblum, founder of the New York Video School and author of iPhone Millionaire, shares in a blog post on NYVS his realization that “the iPhone is the key to an enormous break-out of ‘democratizing’ video and the web.”

When Steve Jobs called the iPhone “revolutionary,” he missed this key point: the iPhone is also a revolutionary media production tool that enables ordinary people to create extraordinary value.

For decades, society has enamored itself with what was once considered a revolutionary consumption device, the television.

Today, although few have yet to realize it, we have in our hands a revolutionary production device, the iPhone.

For over half a century, the communication channels have been owned exclusively by a handful of large corporations. Not anymore.

We have at our fingertips the next mobile era, a renaissance of sorts, when we iPhone users realize our potential to create profound value for society with our technology. For some this will mean breaking news in courageous acts of citizen journalism. For others, it will mean engaging in grassroots commerce, telling stories and sharing information that people will pay for. This phenomenon may even breed some “iPhone millionaires,” as Rosenblum has titled his book.

The next mobile era calls for us to be producers, beyond just consumers. The author is clear on this reality:

We live in a world of apps, but most apps are one-way, that is, receivers.

But the next generation of apps will be transmitters as well, allowing you to put ‘stuff’ into the ‘system’ as well as access it.

For years, I have considered myself an advocate of the Internet for this power to democratize.

Consider this excerpt from an essay I once wrote on the subject in college:

Some say our generation is hooked on silly gadgets. I say we are empowered by these tools. We are not slaves to our computers. We are the active, conscientious drivers of today’s digital democracy, and the engine is the Internet.

The media of the past was hand-fed to us by extraordinary media titans, but the knowledge of today is disseminated through a web of individual citizens like you and me.

Mobile technology will take this idea to the next level, enabling every iPhone user to be a media company. The author of iPhone Millionaire appears to get this, and so I am looking forward to reading his ideas in the book, which is now available on Amazon.