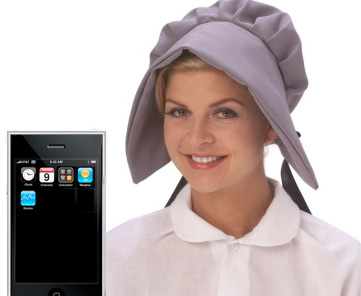 As you may have heard, Apple has imposed yet more restrictions on the App Store, this time vowing to ban apps that feature swimsuits, skin and even mere sexual innuendo.

They even removed a game because the main character (read: cartoon) wore a skimpy outfit.

The App Store changes are due to customer complaints from a vocal minority of people embarked on a crusade to rid the world of the slightest titillation because, well, “think of the children!” Here’s a letter to Apple from one of these censorship-minded Puritans. Let’s hope these folks don’t have their way or the iPhone is going to become rather… unstimulating:

I commend your recent decision to remove sexually-suggestive apps from the iPhone App Store. When I discovered that 8 of my 12 children had downloaded Daisy Mae’s Alien Buffet on their iPhones and iPod Touches, I was deeply agitated by the outfit on that Ms. Daisy. Really, a thong on a cartoon character? Where do these app developers get off exposing my innocent young boys and girls to such provocative imagery? And those bikini photo apps, DEAR LORD are those out of line. Thank you for laying down the law and forbidding these graphic applications.

It was a step in the right direction, however I still have some suggestions for improving the iPhone and making it more family-friendly. Please remove the following apps from the iPhone or I am afraid I can no longer remain an Apple customer:

If I am going to criticize you for what you have done wrong, I should also praise you for what you have done right. I love the Clocks app, it is very useful for waking my children up in the early morning to milk the cows! The Calendar is wonderful for keeping my kids on track with schoolwork and extra-curricular activities. The Calculator is of great assistance for their math homework. And the Weather and Stocks apps are fine, too. Nevertheless, the majority of iPhone apps I consider inappropriate, for the reasons outlined above.

I understand that iPhone has certain Parental Controls, and that you could simply implement Parental Controls in the App Store to keep the adult apps out of sight from my naive children, but really I would just rather you remove all of the applications that can potentially be used to access graphic content. It would give me peace of mind and it would establish Apple as a family company in my mind.

Thank you for your understanding.

P.S. Oh, and those sexy rounded edges on the iPhone body… please fix that too.

What do you think of Prudence’s letter above? Should Apple take more care to protect children from the leagues of inappropriate material they can access on the iPhone? I welcome your opinion in the comments.

Update: Commenter reinharden thinks Prudence does not go far enough in her call for app bans:

As lust for money is the root of all evil, the stock app should be removed as well.

If the map app is removed so as to not pollute the minds of the young with notions of faraway places, similarly the clock app should be modified so as to only show the time at the current location. And the weather app should only show the local weather.

And frankly I’m not sure how I feel about all this touching, especially when combined with all that pinching and zooming. It’s all too sensual and likely overly stimulating for young minds (and hands!).

I was watching the White House Youth Clean Energy Economy Forum on WhiteHouse.gov/LIVE yesterday, and as I was sending a text message to my sister about the event, I was set back by my iPhone’s recommended correction: 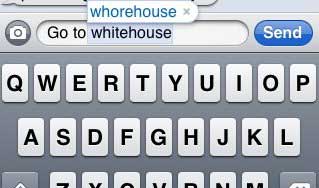 I laughed and clicked X, of course.

But it got past my friend, an employee of Campus Progress who was actually at the event when he shared this with his thousands of followers on Twitter AND Facebook:

Embarrassing, I’m sure, but hilarious.

Director Ryan Landel altered this clip of Stanley Kubrick’s 2001: A Space Odyssey, incorporating an iPhone into the scene: 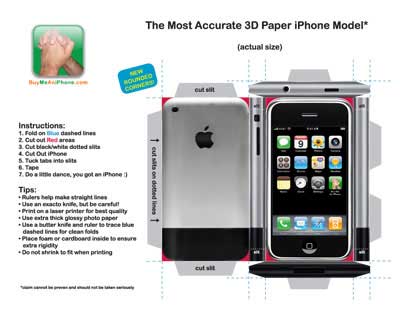 If you can’t wait ’til June to get your hands on an iPhone, this 3D paper iPhone model on eBay might hold you off.

The item is a digital download “of the PDF file used to create the 3D model,” according to the auction.

Tech giants Apple and Cisco kissed and made up today after a six-week brawl over, get this, a name. Yeah, “iPhone” actually. Silly if you ask me.

Well just because everyone else is doing it doesn’t mean you should, too, Apple. Didn’t your mother ever teach you that?

Nevertheless, the two companies agreed to share the iPhone trademark and said their products would “work together in the future.” Good for them.

The Apple iPhone is… a bottle opener, an electric razor, a mouse trap, a condiment dispenser, and more. Watch this hilarious iPhone commercial from Late Night with Conan O’Brien to see what else the Apple iPhone can do.