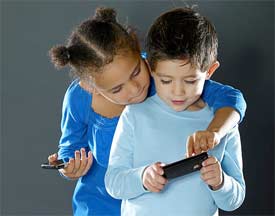 Apple’s in-app purchasing system makes it far too easy for children to buy coins, trinkets and upgrades within games, sometimes unwittingly racking up hundreds of dollars in App Store charges for their parents.

The Washington Post broke the story of a parent who received a $1,400 bill from Apple after her 8-year-old bought hundreds of virtual accessories to customize her mushroom home in the iPhone game Smurfs’ Village.

While a class-action lawsuit over this issue has incited a debate over whether these unwanted in-app purchases are Apple’s problem or the parents’ responsibility, I am taking the position that Apple should do more to prevent app developers from manipulating children and enticing them to make purchases that they do not know the consequences of.

In a CNET thread about the class-action lawsuit, many parents proclaim that these are BAD PARENTS for suing Apple:

People need to grow up and take some responsibility. These are the values that we are instilling in our children!

If you give a kid an electronic devise that can connect to the Internet…and you don’t watch what they are doing…or educate yourself and the child about its capabilities…that’s your problem.

Instead of blaming someone else, how about you take a good look in the mirror and ask yourself what YOU could’ve done, like, for example, and I might REALLY be out of line here, BE A REASONABLE, CONSCIENTIOUS PARENT?

I disagree with this pro-Apple, anti-parent sentiment. While I hope that every child is fortunate enough to have a good upbringing, I do not believe it is solely parents’ responsibility to shield their children from the manipulative actions of overreaching companies.

I agree that parents have a responsibility to teach their kids important values. However, I do not believe that we should simply give companies free reign to manipulate children and expect that parents should have to protect their kids from the bombardment of this marketing. For this reason, I believe Apple has a responsibility to prevent developers from using the App Store to take advantage of kids who might buy a bucket of gold in an iPhone game unaware that they are actually costing their parents money.

While Apple did make a change to its in-app purchasing system by issuing an update in iOS 4.3 that requires password reentry to make an in-app purchase, some parents say it is too little, too late.

Corporations like Apple are not people. They do not understand ethics, they understand profits. So if a class-action lawsuit is what it takes to make Apple take a stronger stance against in-app marketing to children, then I am all for it.

Do you agree or disagree? Feel free to share your opinion in the comments.