Sorry to go on about this Meizu M8, but I thought it newsworthy to mention that Meizu’s iPhone lookalike may have a 16GB storage option, according to specs posted on the Meizu forums. 16GB, that’s double the memory of the top-of-the-line iPhone.

Sounds good. Hopefully Apple will follow suit and include a bigger flash memory in iPhone v2.0. 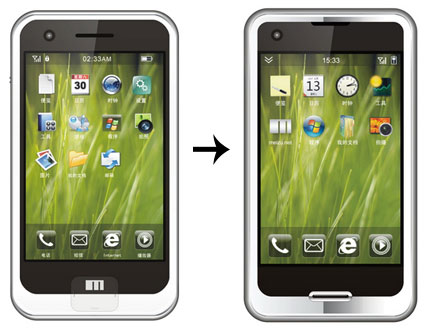 No, what you see above are not two accidentally repeated images of the same phone. Actually, Meizu revealed some new renderings of the miniOne iPhone clone (formerly the Meizu M8) that look hardly different from the old ones.

Maybe Meizu is trying to get past Apple lawyers, who will have to strain their eyes to see the difference between the old and the new Meizu miniOne.

Do you share my sentiment that this barely qualifies as a non-iPhone-knockoff? Because the people over at the Meizu Me forums seem delusional to me. 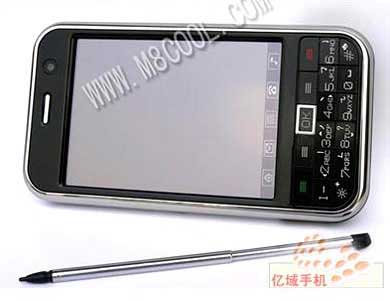 As you would expect in Asia, the mobile phone market is flooded with iPhone clones by now. The Meizu miniOne (formerly known as the Meizu M8) was the first nearly-identical iPhone lookalike we saw.

The latest contender is the IP2000, whose top half is nearly indistinguishable from that of the Apple iPhone, if not for its frontal camera lens.

Unlike the iPhone, the IP2000 sports an added number pad, because the touchscreen functionality on the display is optional. An “OK” button replaces the iPhone’s Home button, and four menu buttons have also been added.

This Engadget reader brings up an interesting point:

“Is it even possible to make a full-touchscreen cell phone without it looking like the iphone?”

With all the news of iPhone-inspired mobile phones, I thought I’d put together a list of the five most notable iPhone clones:

See these iPhone competitors reviewed after the jump:

Apparently Meizu looks up to Apple like a big brother, because just as Apple used the iPhone name despite Cisco owning the iPhone trademark, Meizu’s iPhone clone, miniOne, also happens to share its name with a Venzero portable media player that has been out since last June.

Is Meizu being so aggressive in the hopes of attracting loads of attention via all the negative publicity? It’s working, I’m sure.

I can’t wait to see what happens when Meizu gets pounded left and right with lawsuits.