A Malaysian software developer named Youmolo caused a stir when he posted a video on YouTube demonstrating some iPhone emulator software he had built for his Pocket PC.

Disappointed about not having seen any download links to the software on Youmolo’s blog, many visitors urged him to distribute the iPhone emulator. Youmolo turned down the request, “because I’ll get sued,” he said.

The next day YouTube removed Youmolo’s video as per Apple’s request. Apple also sent a cease & desist letter to Youmolo demanding that he stop developing/distributing the software.

Now a Polish lawyer has posted Youmolo’s Pocket PC iPhone emulator on his site, insisting that Apple has no right to claim copyright on the icons or wallpaper images.

Do they? What do you think? 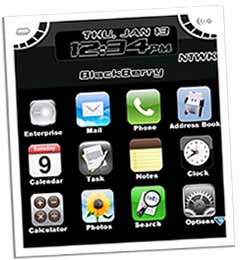 Apparently, some people don’t take threats from Apple’s legal team too seriously, because another iPhone skin has just been released, this time for the BlackBerry.

Click on the image to the left to get a larger view. The BlackBerry iPhone skin can be downloaded for free at BlackBerry Theme Central.

Soon after the iPhone unveiling, a group of excited Apple fans who couldn’t wait ’til June to get their hands on the breakthrough communication device created some “iPhone-looking skins” for their Windows Mobile and Palm smartphones, only to receive a threatening letter from Apple after sharing the skins on the Brighthand forums.

The imitation iPhone skins, which mimicked the look of the iPhone interface but did not add any extra features or functionality to Windows handheld devices, were removed from the site.

Apple also sent a cease and desist letter to Paul O’Brien demanding that he remove from his Windows Mobile community MoDaCo.com a screenshot and link to the iPhone skins.

Apparently, Apple thinks it can silence the press for reporting news it does not like. That’s one way to kill the buzz surrounding a new product.