If you’re among the thousands of iPhone fans who will be standing in line on June 29 to get their hands on Apple’s long-awaited mobile phone, read this iPhone Line-Waiting Survival Guide for 10 must-know tips on staying safe, comfortable and entertained while you wait:

1. Arrive as early as possible.

Lots of people plan to camp out in front of Apple and AT&T stores. Arriving the night before may or may not be necessary, depending on the location of the store and the quantity of iPhones available. 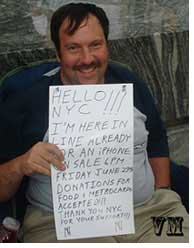 The first line of iPhone campers was formed yesterday in front of Manhattan’s Fifth Avenue Apple Store by Greg, a single retiree who marked his territory more than four days before the iPhone’s arrival.

Gizmodo interviewed Greg, who said he is a single retiree, so he’s got plenty of time to sit and wait for the iPhone.

He holds up a sign letting passersby know of his early arrival and asking for donations for food and Metro cards. 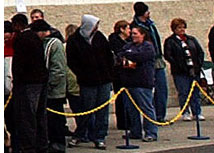 A handful of self-proclaimed “professional line waiters” on craigslist are offering to save you some time by holding your spot in line for you at an AT&T or Apple store on the 29th.

So if you’re at work or in class during the iPhone launch, you might want to consider hiring one of these highly-skilled individuals to save your spot for you for $250. 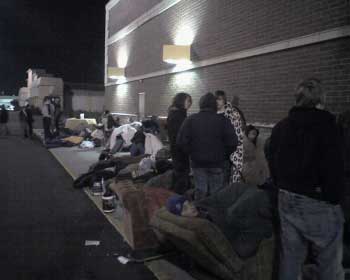 Apple will ship 3 million iPhones to the U.S. for the device’s debut on June 29. That’s a heck of a lot of phones.

In fact, some analysts have predicted that Apple will sell 3 million iPhones by the end of 2007.

So does that mean you’ll be able to pick up an iPhone without having to camp out in front of your local AT&T or Apple store?