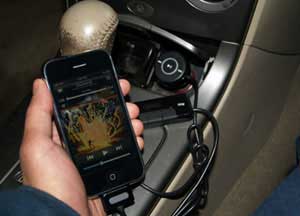 I was really excited to receive Griffin’s first iPhone FM transmitter in the mail because up until a few months ago I had no way to listen to my music on the road… except by burning CDs, and who does that anymore?

I first used the Griffin FM transmitter while traveling down from north Florida to Miami, a six-hour drive. I was in the passenger seat so I had a chance to mess around with all the controls and devote my full attention to it.

You can learn more from the iTrip AutoPilot manual (PDF).

Griffin iTrip AutoPilot for iPhone – How it works 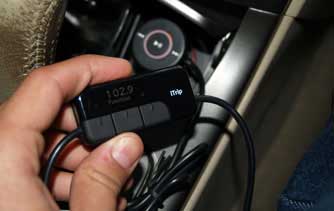 Once connected to your car’s power socket, the iTrip’s so-called SmartScan will seek out the 3 clearest radio frequencies and program them into the transmitter’s presets.

All you have to do is choose a frequency on the iTrip and then set your car radio to that same station. From there, Griffin’s FM transmitter will broadcast what your iPhone is playing through your car’s speakers… that is, in theory.

As it turns out, Griffin’s FM transmitter for iPhone has worked only 1/3 of the time.

I kid you not, I have spent hours fidgeting with stations and looking for a clear signal, often with no luck. At best, the iTrip AutoPilot will play for 10 minutes and then the signal will go fuzzy with static.

I have tested the AutoPilot in Gainesville, in Orlando and in Miami, and it has never been dependable.

The verdict on Griffin’s iTrip AutoPilot

I wish I could, but I can’t recommend Griffin’s iTrip AutoPilot FM transmitter for iPhone.

I delayed posting this review, because I believe Griffin is a good company and I wanted to give the iTrip AutoPilot a fair chance. But after giving it another shot tonight, it is clear that this thing is just plain unpredictable.

Granted, I have a feeling FM transmitters are generally erratic and unreliable. But for $100, Griffin’s iTrip AutoPilot for iPhone is simply not a risk worth taking.

From what I can gather,you are receiving a stonger signal on the FM broadcast frequency (Station Interfearance)than your Griffin RoadTrip.This is interfearing with the signal and blocking the reception from your Ipod/Iphone. When you drive arruond these signals will change in strenght, hence the comming and goings of reception. It works better in a country where we have less radio transmission.

I have one of these myself and it works 100% of the time. There is a way to set the frequency to transmit at 87.5fm. I have never had a problem with mine while set to 87.5fm. You may want to try that.

Having read your comments re the radio connection, I am sorry that I purchased the Ipone bracket for BMW . They should include the option of radio transmitter besides the Bluetooth. The Ipod has such good sound and large storage!

I just bought one to use with my iPhone – but I haven’t even had a chance to experience any problems – because I can’t get the app!!! It says “don’t buy today – we’re working on it.”. What’s up with that?

Great to know, Mark. Thanks!

I purchased the new Griffin RoadTrip with SmartScan and have not been disappointed. It works with both my iPhone and my iPod w/video, the 60 gig model. It scans for the three best available clear frequencies and all you do is tune to one of them. I have not had any trouble with intermittent playing of music at all. Plus it charges as it plays. Great so far.