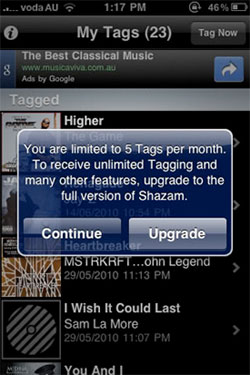 First, it was the Pandora Radio app, which added annoying audio advertisements in an App Store update. Then, after updating the Shazam app this past summer, I recently learned that the app now becomes obsolete after five uses (per month) and forces you to pay $5 and upgrade in order to restore its functionality. That’s what you get for being an early adopter, I guess.

Typically, when you think of an update, you expect features to be added to your apps. Occasionally, though, companies are updating apps to remove — rather than add — functionality from apps.

I expect some people will say the company has the right to do whatever they want, especially because it’s a free app. I agree. However, is this sound business practice? It’s certainly a great way to piss off — or at least annoy — your most loyal users.

It is the classic bait and switch — they advertise the product as free and unlimited, then swipe your privileges away and force you to pay in order to maintain the features you once enjoyed for free. As one user in a forum thread discussing the issue asked, “How do I know that I won’t be required to pay more to keep using their product in the future?”

It is time for the web community to stand up and shout that they are sick and tired of constant terms of service changes, privacy changes, steps backward in usability that degrade our mutual experience, comfort level with the sites we use and our enjoyment of the web.

Just as social networks are increasingly taking advantage of users with constant terms of service changes, App Store app makers are doing the same. Sure, no one is going to take away these businesses’ operating licenses, but it’s a good way to hurt the brand image.

What do you think? Is this unethical behavior? Should app makers show more respect to their early adopters or are they perfectly entitled to pull the proverbial rug out from under their users’ feet with App Store updates that remove functionality?