A post I wrote on my cracked iPhone screen over two years ago has received over 200+ comments from readers who had similar experiences damaging the glass on their iPhones. 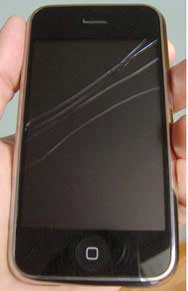 In January of 2008, I shattered my iPhone screen and took a trip to the Apple Store to get it repaired. I paid $250 to exchange my broken phone with a refurbished iPhone. Apple does not repair cracked iPhone screens. Instead they classify your iPhone as damaged, give you a replacement iPhone, and ship your broken one off to be refurbished for the next poor sucker who drops his iPhone.

Various accounts from commenters on my original post raise the question of whether Apple is being fair to its iPhone customers:

Apple will not even consider for a moment that this very serious and apparently common issue is worth investigating, it is far easier to class it as abuse while reaching their hands out and expecting me to fork over $300 for something that would cost them no more than $20-$30 to fix. So now here I am, with 3 iphones, 2 of which are broken.

My daughter tripped while hers was in her pocket the phone did not hit the ground but the screen shatter. (I saw it happen) The apple store wanted 200 for a new phone. She is 17 and bought it with her babysitting money, after doing quite a bit of online research chose the iphone over the blackberry. No where was it disclosed that the screen is so fragile.

My mother’s iPhone screen cracked not too long ago as well. We documented our experience with Apple’s service department.

In brief, Apple refuses to do repairs on broken iPhone screens because they fall under the category of “accidental damage” and therefore are not covered under warranty. Instead, the only option they give customers is to buy a replacement for $199, the same price as the new iPhone 3G coming out on July 11th.

Is Apple being unfair to iPhone users by not offering a reasonably-priced glass repair service? Readers report Apple’s replacement iPhones are now $199, down from the $250 I paid two years ago, but nevertheless an inflated price to pay for a relatively simple repair.

Given the high risk of cracking your iPhone screen, the lack of available insurance, and the high cost of replacing an iPhone, Apple must be making a killing off of iPhone users who have cracked their iPhone screens.

A couple of attorneys even left comments on my original post, speculating that the iPhone’s commonly cracking screen could be worthy of a class-action lawsuit.

Are cracked iPhone screens worth a legal battle? Do you think the iPhone screen is too prone to cracking, or is a touchscreen phone naturally more likely to crack because of its glass surface? Please share your opinion in the comments.

I just got my IPhone a couple of months ago, within one week -it’s screen is broken. My concern is that after all the negative feedback by people who have had the same thing occur. Apple will not pay for repair, warranty won’t pay. I have to say, I am disappointed with Apple. Looks like other users are pissed off too and not buying these phones anymore. I’m a single mother and disabled, so there is no way I could afford to have it fixed. I love the phone otherwise. I just believe that Apple should be concerned. No wonder-… Read more »

Today, while at the carnival, my IPhone screen cracked from god knows what. I have a case on it, and treat it like it is a newbprn baby. It really sucks that i am going to have to pay for this to be fixed, espically since it wasn’t my fauly, but Apples… I’m thinking about a droid… Who’s with me?

Apple should replace the glass for free.I dropped my phone(as people do on lots of occasions).its very dangerous as my sister picked it up & got shards in her finger which took some time to remove..Now I can’t read the screen ..bring on the lawsuit..

Hi there, I bought my iPhone 4s from orange carrier in the uk. My screen cracked while I was texting! Both apple and orange told me I had to buy a new one. I emailed the Orange uk chief executive and threatened to postpone my contract and take legal action due to the unaddressed problem of the dangerous iphone screen. Guess what? They sent me a new one the following day for free! (orange CEO email address is olaf.swantee@orange.co.uk) good luck!

Again, I totally agree with all of you. I don’t know if I mentioned it, but I think this last phone has been saved from glass breakage, and maybe it is just luck, by the otter defender series case. Yes it is bulky but try not as I might, I have dropped my phone a number of times, even in the snow last year where when I went back and found it, it had been run over by a car, and the glass is still intact. The case was bent a bit after the car or more than one had… Read more »

Apple deserves a lawsuit. I have had my phone for a year and now both the front and back glass are cracked. and the bits of glass are slowly but surely falling out all together. While iPhones are amazing little phones they aren’t worth the highly over priced repairs. In our economic state I find it hard to believe that Apple consumers have allowed this robbery to go on for so long. I think we need to see a change in the way Apple dishes out repairs. If they won’t replace the glass for free they need to put glass… Read more »

I totally agree with you. I bought a new iPhone 4 a week ago. I dropped the phone on the lug, very soft robber, then it cracks glass. So I call phone company, they said the cost to fix is $199. This is ridiculous. They do not fix the phone only replacement. Also they offer me getting AppleCare like insurance. They said “it is cheaper than one time fix or replacement . I feel this is another way to make money. If it is possible to lawsuit, we have to do.

I just finally got the beloved iPhone 4 about 3 months ago and lo and behold, I dropped it face down. Now I did have a Case-Mate case but it does not protect the front. The glass is shattered into many pieces. I called Apple and yes they will replace the glass for $199. I also found a very reputable 3rd party cell phone repair shop that will do it for $135. But I ask you….Is this common problem a defect? Yes it is. If so many people are having this occur, there is definitely a flaw in the design.… Read more »

I just dropped my iphone and got a cracked screen. Fortunately the phone still works. However, what really sucks about it is that I havent even had it a month yet. Now, it looks like I will have to basically go and buy a new one. If Apple is making a killing on this no repair/buy a refurbished one policy, I’d say that is cause for a lawsuit.

I believe this was done purposely by Apple. Can you imagine the cash flow just from screen repair???

Bought 4 new iphone 4s for Christmas and broke 2 so far. Both were in cases. One in a very expensive Mophie case which broke first time dropped as well.

Someone please start a class action suit! Just bought my daughter her second 3GS in a little over a year. The backlight died on the first one – just a month out of warranty. I buy her a new one and within the first week she drops it one time and the LCD screen cracks in several places. Basically, I’m now stuck paying more to replace it than I paid for the phone. I’m going to try to switch the LCD from her other phone to her new phone instead but it’s ridiculous that the phones are so fragile! My… Read more »

I would sign it, just on general principles… These issues really need to be resolved!! If you do get another one, and you don’t have it already, make sure you buy an otterbox case for it. They are less expensive now and far as I can tell very protective!!

I think this is something apple must work on! I just bought an I-phone 4 and in less than 1 a day, the screen is cracked.. It didn’t drop too hard. I’m a first user and trust, i can’t recommend this phone for any of my relatives and friends.

I have had my g4 since this summer. So far no cracks. I have dropped it a few times. I guess I am lucky. I always keep in in case. Recently I got the ottorbox defender series case. It is a bit bulky and heavy with the clip (which I cannot find at the moment), but it seems very protective. I thought apple said the new G4 had a better shatterproof case? I figure people would still have cracked glass. I think the glass is like a diamond. You just have to drop it at the right place (no matter… Read more »

Every Iphone I see has a cracked screen. My daughter bought the first version ever and it was indestructible. We now have two more current, including just released and they broke with tiny tiny drops. I want to find a class action to join if anyone knows of one.

Just had to pony up $199 for a “replacement” iPhone – my screen cracked after falling from the staggering height of 18 inches onto a carpeted floor. This after having just bought the phone 2 months ago as a replacement for an iPhone that kept dropping calls that neither AT&T nor Apple would fix/replace. I found this site by searching for “iPhone Class Action” … I can’t believe no one has filed this … let’s get this lawsuit underway – these people are criminals and do not deserve a free pass on a poorly designed/manufactured product.

As for class action suits… good idea for the fact that the glass repair is way to much and the apple warranty doesn’t cover the glass. But in general I find class action suits not to profitable in time or the amount of money people get back., but if it changes the company to do the right thing it might be worth while. I am not interested in a money reward, but maybe everyone who had an I phone should get a certificate for a free glass replacement should the glass ever crack!

My iPhone 4 is less than a month old. The other morning I noticed a crack across the top left corner and another crack along the edge of the back glass panel. The Apple tech agrees with me that the phone was not dropped but, he said, “There are many ways to crack a screen.” I carry it in my shirt pocket; never dropped it; never sat on it; never tossed it anywhere yet Apple tells me it is my fault the screen cracked. Can’t be; I handled that iPhone with greater care than my first born child. The Apple… Read more »