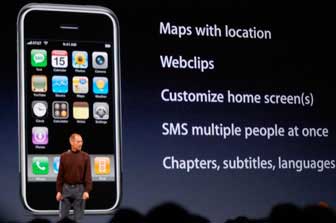 Steve Jobs today at Macworld announced some impressive new iPhone features, all of which are now available on iTunes via iPhone firmware update 1.1.3.

Among the upgrades: pseudo-GPS, the ability to send one text message to multiple recipients, movable icons on the iPhone home screen, and a feature that lets you place “web clips” of your favorite sites on the home screen for easy access.

Continue reading for details on all the new features. 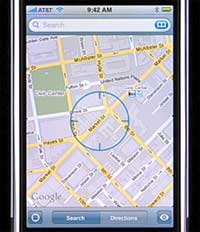 If you’re a longtime reader of Apple iPhone Review, you may remember that last March I suggested that Apple add a “Google GPS” feature to iPhone. Well, they’ve finally done it. But iPhone’s GPS feature is not an actual GPS, which would require a hardware upgrade.

Rather, the new “location tracking” feature uses cell phone tower triangulation and WiFi triangulation to pinpoint your position within the Google Maps application. By calculating your iPhone’s distance from nearby cell towers and wireless access points, iPhone can figure out where you are on the globe.

You can then pull up a map from your current location to your desired destination. Pretty nifty.

The downside of this feature is that if you are in an area with fewer cell phone towers (probably in more rural areas), the location tracking will be less precise. Only time will tell how reliable this feature actually is across different landscapes.

In my post on 25 things wrong with the iPhone, one of the biggest complaints among readers was about iPhone’s inability to send text messages to more than one recipient at a time.

Mass text messaging is an option on many phones, so I can only wonder why it took Apple so long to include this feature.

Sending a message to several people is as simple as selecting names from your list of Contacts. You can also create groups of contacts for quicker mass text messaging later. 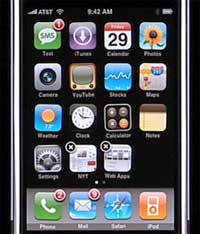 You’ll now be able to change the order of icons on your home screen, plus add more icons. Touching any widget and holding your finger in place for a couple of seconds makes all the applications start to wobble around (hopefully you’re not easily nauseated), indicating that you can now customize the home screen by dragging and dropping icons.

What’s more, you can now take snapshots, called “web clips,” of your most-frequented sites and blogs and place them on the home screen as bookmarks. Plus, the upgrade lets you add more pages to your home screen, which you can flip through with your finger (kind of like Cover Flow). This is going to become especially handy when Apple opens up the iPhone to third-party apps in February.

I think web clips are a great idea, but I would love to see them expanded to iPhone applications as well. For example, why not let me take a snapshot of a map to a certain location, or of the Videos section on the iPod app, and then place it on the home screen for easy access? 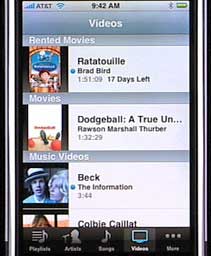 Jobs also announced at Macworld that iTunes will now sell movie rentals, which can be synced to your iPhone and kept for 30 days under a Movie Rentals section in the iPod.

Unfortunately, once you begin watching the movie, you only have 24 hours until you can no longer access it. I think one day is too brief. I would much rather have a title that I can watch whenever I want over the span of a few days. What about you?

New titles will face a lag time of 30 days from the DVD release before they are added to the rental store. This was probably the result of a compromise between Apple and the studios, but it’s a significant lag time, which reduces the appeal of the service, in my opinion.

With each update, Apple continues to demonstrate the flexibility and appeal of a touchscreen phone like iPhone. Pay a single fee up-front ($300-$400 at the time of this writing) and you’ll have the privilege of continuous upgrades and innovations that cost neither you nor Apple a penny. This is what, to me, makes the iPhone truly revolutionary.

If you’re an iPhone owner, are you enjoying the new features?

How about those of you who have yet to buy an iPhone: does an upgrade like this make it increasingly difficult to resist?

Jim – If you use this app, your recipients will NOT see your entire address book. They only see that the text is from you. I hope this app meets your needs.

You still can’t send mass text BCC and I’m not interested in showing the whole world my address book. If I’m wrong, someone please correct me and tell me how I can do, with app or not.

I truely belive that Steve Jobs has done a fantasical job. I’d love to shake his hand and tell him, ”good on you mate, good on you!”

It is absolutely suuuupeeerrr duuuuupperrrrrr fantastical. I just looooove the iphone!

Corrie, I found these instructions on how to stream Sirius radio to your iPhone if you have Windows. It sounds sort of complicated, but it might be worth a look.

oh i am so happy to hear about the new updates!!!! i havent connected my iphone to my computer since xmas and was unaware of most of them. thank god for mass SMS!!!! if u are a subscriber to Sirius…is there a way to connect thru itunes?

The applications are fantastic, cant wait to see the new 3rd party applications coming in Feb.
APPLE are truely bellwethers.

I agree, the copy/paste function is a must have. Also, I should be able to view a picture via safari and save it to my phone, but I am unable to do so.

I have been on the fence about plopping down almost $1000 to switch my family from Verizon to AT&T so I could get the Iphone. After the anouncement of the new update, I took the plunge. I love the Iphone. I am a die hard Treo user. But I must say the Iphone is extremely easy to use. Once they add google docs and third party apps this will be a perfect machine.

It was pricey to move carriers, but I am enjoying the Iphone.

one of the problems encountered by my friends about their iphones is that it cannot forward received messages.

I think the new features are great but like you, believe #1 (cant copy and paste) and #3 (cant support java/flash) should have been on top of this new feature list. coming from the blackberry, copy and paste was a significantly used feature! also, i would love to be able to listen to sirius via the iphone. (i know there is some crazy way to do so but seems beyond my capability tech wise). i believe java/flash supports sirius online radio. Great website!!