iPorn and its customers believe that having to open the safari browser on the iPhone in order to visit the iPorn website is too much of a hassle. An app that is accessible only to adults would be much more effective and safe. The whole world is waiting for Apple to stop controlling the type of applications its users are allowed to access. The approval of the iPorn iPhone app would be Apple’s first step in the right direction – NO MORE CENSORSHIP!

How to Restrict Adult iPhone Apps?

Adult apps in the App Store would actually be easier to restrict than websites in Safari. Just as other iPhone functions are controllable in Settings >> General >> Restrictions, adult content could be restricted here, too. 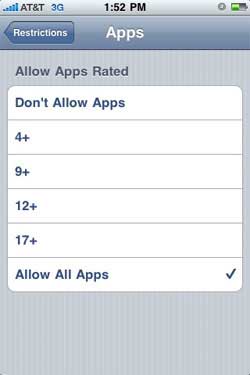