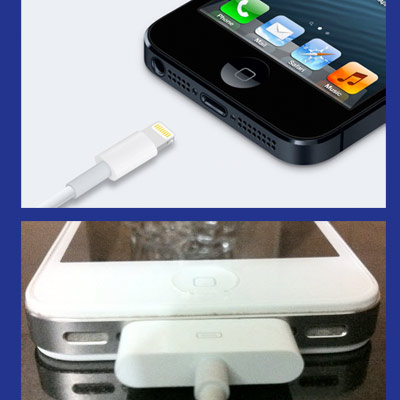 Now that the iPhone 5 requires a different Lightning connector, your iPhone 4/iPhone 4S (or older) accessories will be incompatible with new iPhone 5 ones. When considering an accessory purchase this time around, don’t let Apple force you into getting new accessories every time the iPhone is upgraded. Instead, get wireless accessories for iPhone 4 (and earlier), iPhone 5 and future iPhone cross-compatibility.

Why Wireless? Because they rely on the Bluetooth and Wi-Fi features present on your iPhone and many other devices, wireless accessories are often compatible with many devices, without the need to buy a specific accessory for each phone or device, like a speaker with an iPhone 4 or iPhone 5 specific dock.

2. Cloud storage. Cloud storage syncs your computer files to your iPhone, eliminating the need to connect your iPhone directly, thereby avoiding cable incompatibility issues. You can use iCloud or another service.

Recommended Product: I began using Copy after SugarSync’s sudden price change several months ago. I am pleased with Copy (a free cloud backup solution with an iPhone app) and will write about it in the future.

Remember, by going wireless, we avoid future incompatibilities between iPhones as long as Bluetooth remains a standard. Wireless accessories and apps can go a long way to avoiding a headache in the future as technology changes.

Here is a brief rundown of 7 neat iPhone accessories just added to the AppleiPhoneReview.com iPhone shop.

Be sure to visit the shop to check out these and other top-notch iPhone accessories.

A retro silicone iPhone case that is both stylish and affordable. Flash back to the ’80s and ’90s with this classic cassette iPhone case.

This iPhone horn stand amplifies your iPhone’s built-in speaker by 13 decibels without the need for a battery or power source. Cool!

This Gameboy iPhone case is great for Nintendo-loving iPhone owners. Protect your iPhone in style with this retro and affordable silicone case.

The NUU Minikey iPhone keyboard is for those iPhone users who can’t quite get used to the iPhone’s touchscreen keyboard. The NUU Minikey for iPhone is a case that doubles as a portable physical keyboard.

At 6 feet in length, this basic white iPhone USB cable lets you charge your iPhone from those hard to reach spots.

The Looxcie camcorder for iPhone is a Bluetooth headset that lets you record video of your most cherished moments without the need to take your hands or eyes off the action. This sleek wearable camcorder also takes phone calls just like your typical Bluetooth headset.

Welcome to Sunday Shopping, a new series where I highlight the week’s most interesting iPhone accessories from the new AppleiPhoneReview.com shop.

Today’s Sunday Shopping installment will highlight a collection of tough iPhone cases, a car mount that doubles as a passive amplifier for your iPhone, a case that also charges your iPhone, and more. All orders in the shop are directed through Amazon.com for the best prices & customer service.

First, check out our roundup of rugged iPhone cases, a collection of must-have cases if you are at all worried about damaging your iPhone. Because over 300 readers have written into this blog with stories of cracked iPhone screens, a rugged iPhone case is undoubtedly a wise investment.

I have personally reviewed the Otterbox Defender and can attest to its toughness. In the shop, I have listed 7 iPhone cases that are among the most rugged:

What sets the Kensington iPhone Mount apart from other car mounts for the iPhone is its Sound Amplifying system, which channels noise from the iPhone’s built-in speaker and outputs it at double the volume. This passive sound amplification requires no battery or cables.

I have previously tested the iMainGo2 speakers and can vouch for the reliability of this speaker case. It cushions your iPhone and protects it well while blasting music out of small speakers that are surprisingly loud. It’s even got a wrist strap for carrying the speaker case around with you.

The iMainGo2 is also compatible with other portable media devices, including smartphones and iPods. For a more high-tech counterpart to the iMainGo2, see the iMainGo X.

For such a powerful battery, it is surprisingly slim and won’t add too much bulk to your pocket or purse.

What did you think of this Sunday Shopping installment? Have you tried any of these iPhone accessories? Please feel free to share your opinion in the comments.

The Spider Podium by Breffo is not your average iPhone stand. It is advertised as a “flexible gadget grip and travel dock” that can adapt to many different mounting situations. So how does it fare in the real world?

You’ve got to hand it to Breffo for coming up with such a creative mounting solution. The Spider Podium has, as you might expect, eight legs that are multi-jointed and extremely flexible. It will hoist up any generation iPhone, including those with cases. And the possibilities for mounting with the Spider Podium are nearly endless. 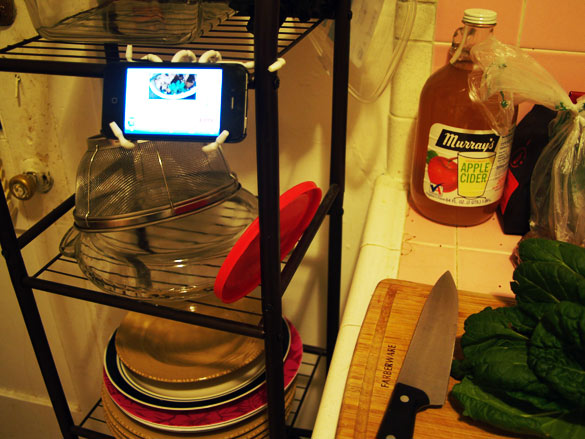 You can mount it to the dish rack so that you can refer to a recipe while you cook; 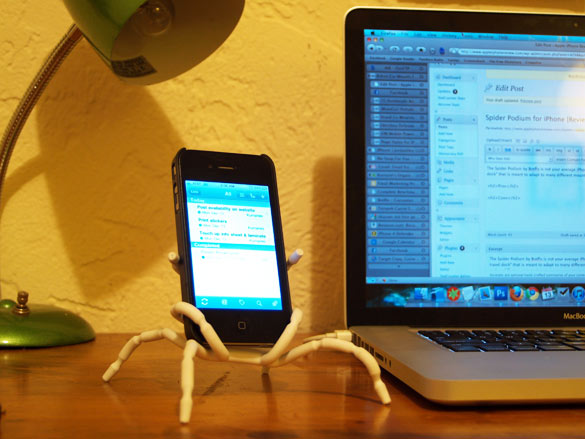 prop it on your desk while you crank through your to-do list; 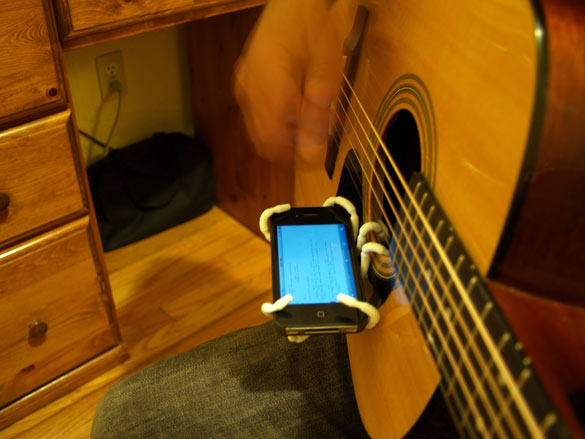 or even hang it from the soundhole of your acoustic guitar while you read the lyrics to a song you’re playing.

The Spider Podium is great for creative people because it’s like play-doh with a purpose. Once you use it for a few days, you’ll start to come up with unique mounting setups for a number of different situations.

So it’s great for creative people, but for the rest of us? As my friend who observed me using it said, “seems interesting, but not practical.” The one problem with the Spider Podium is that it takes some time and some fiddling around to get the podium mounted where you want it. When you’re rushing to get on the road, do you really have time to bend a bunch of little parts to get this thing to mount on the air vents of your dashboard? Better to just get a car mount. 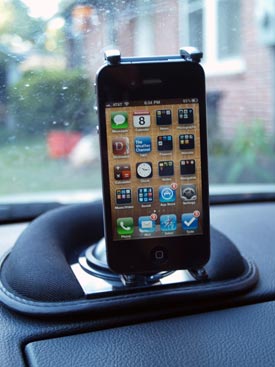 Arkon is a manufacturer of car mounts for the iPhone. The company recently sent me a couple of mounting solutions for the iPhone 4, and I have been testing them out for the past month.

The package Arkon sent me contained the following items: 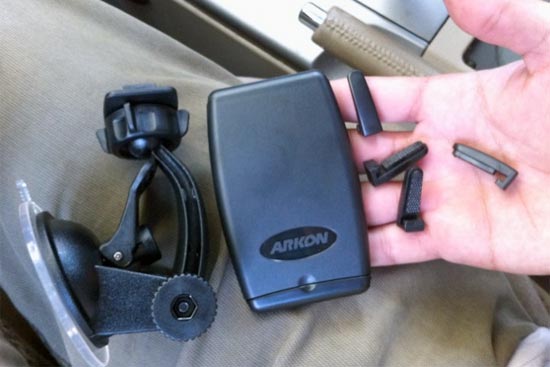 I have to say I was a bit overwhelmed when I first received the package due to the sheer number of parts. First there is the weighted dashboard mount — which if I may be honest is far from “mini” as the product name states. Then there is an adhesive hook to prevent the weighted mount from sliding off the dashboard. Then there is the pedestal that attaches to the mount. The pedestal is comprised of several parts which you have to assemble, including the plastic pedestal itself, the Slim-Grip holder, and four support legs that you have to slide into the holder before you can mount your iPhone.

Phew! That’s a lot of parts. As Apple customers, we want products that “just work,” as the old Mac slogan goes. I don’t want to have to read an instruction manual to figure out how to use this thing. I just want to take it out of the box and use it. 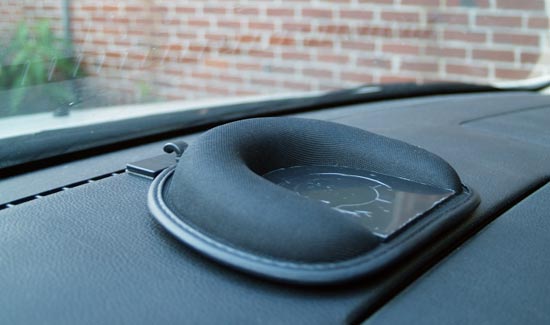 The friction mount was in fact too large to fit anywhere but right in the center of my dashboard, and even there it was difficult to hook it to the safety hook due to lack of space. Arkon advertises this mount as more portable, since you can use it in several vehicles, however my package only contained one adhesive safety hook, which is not portable yet is vital to preventing the mount from sliding off your dashboard. 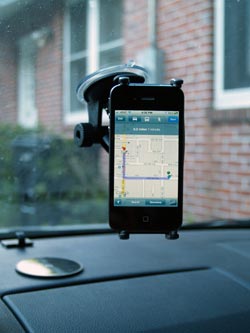 The one subtle difference between the GN014-SBH and the GN015-HPB-2 is that the latter allows you to adjust the angle of the holder higher or lower, in addition to the swivel ball that both pedestals feature. I like the swivel ball because it allows for easy manipulation of the iPhone’s position. 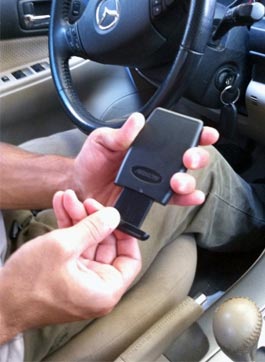 The only holder that Arkon offers for the iPhone 4 is the Slim-Grip Holder, and I must say this part makes the Arkon mount a deal breaker for me. The Slim-Grip Holder requires you to slide four support legs into grooves in the holder, but I found this to be troublesome. The reason is apparently that this is a universal mount, and so the support legs can be adjusted to suit any phone. The problem for me was that these legs were difficult to adjust without using considerable force.

Furthermore, to mount the iPhone, you need to pull the spring-loaded grip mechanism down and then it will spring back up and secure the phone to the holder. This sounds practical in theory but it is not ideal because a) it’s a pain in the butt to pull the grip mechanism down with one hand while mounting your iPhone with the other, and b) the spring puts considerable pressure on the iPhone 4, which makes me slightly uncomfortable.

I would much prefer a holder that was fitted perfectly for the iPhone 4 so that I could be spared the trouble of adjusting the legs and the inconvenience of mounting the phone with the spring mechanism.

In conclusion, I like the swivel pedestal and the adhesive dashboard disk, but I was not a fan of the friction mount or the Slim-Grip holder. Show me a fitted holder that I don’t have to fiddle with too much, one that “just works,” and then I might change my mind.

Thanks sincerely to Arkon for providing these mounts for review. I hope the company will consider implementing some of this feedback into their product line. For pricing and other details, visit the Arkon page for iPhone 4.

Update #2: Congrats to the winners: Ryan, Kristina, Ritchie, The Junk Monger, Rob, Zack, Mike, Benjamin, Chris and Mary. I have sent you emails requesting a mailing address. Thanks to everyone who participated!

Update #1: Amanda of CraftyGalDecals has offered to donate 10 single packs of the iPhone 4 decal wraps. Leave a comment on this post to receive yours. Let me know if you have a color preference.

Not satisfied with Steve Jobs’ answer to the iPhone 4 antenna issue? To avoid blocking the antenna signal when holding the iPhone 4 left-handed, Jobs says simply “stop holding it that way” or use a case. Gee, thanks. Jobs’ suggestions are not ideal fixes for many people, including Etsy seller CraftyGalDecals, who came up with her own smart solution to the iPhone 4 reception issue. 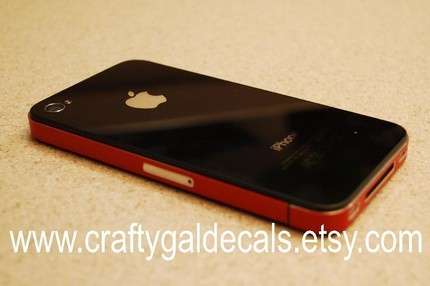 CraftyGal has devised a simple vinyl strip that blocks the conductivity from your finger from interfering with the iPhone 4 antenna. Although I have not tested the decals myself, they should theoretically work, considering an iPhone case has the same effect. As someone who sometimes likes to go without a case — to get the “real” iPhone experience, as Apple intended — I appreciate this alternative solution.

The decals come in a multitude of colors, and add style to your new iPhone without the need for a case. Plus they will protect the bezel of your iPhone 4. You can purchase them from the CraftyGalDecals Etsy store in single packs or in sets of three.

The seller has offered to donate a few decal sets to my readers, so leave a comment if you want one and I will select the winners by Tuesday, July 6. In exchange for the gift, I simply ask that you come back here and comment to tell me if the decal solved your iPhone 4 antenna problem.

Leave a comment below for a chance to win.