The iPhone “How To” commercial reveals on the phone’s home screen the presence of a 12th mystery app, as discovered by Dr. Macenstein earlier this week.

Whereas the iPhone we’ve been seeing since January shows two rows of 4 icons and one of 3, the iPhone ad showed a third row with 4 icons, as if the icons had been shifted over to make room for a 12th: 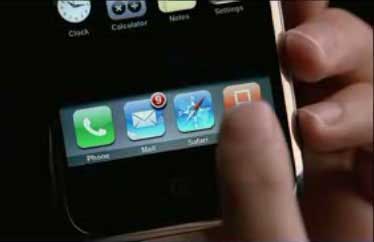 After Macenstein revealed the slip-up, Apple edited the ad on its website to show only 3 icons in that last row.

Now Gizmodo is pointing out the possibility of the 12th icon being a YouTube app.

“YouTube has been going crazy converting all their video to the H.264 codec. The iPhone supports H.264, as do iPods,” writes Gizmodo’s Mark Wilson. He added that a couple “quasi-reliable” sources confirmed this rumor.

YouTube on the iPhone might make the device more appealing to the youth market. But how slow would streaming video be without 3G?