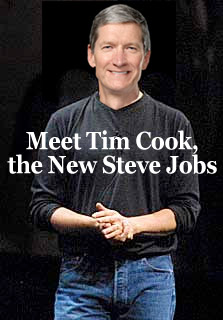 Not a whole lot. That’s my take on it anyway, and here’s why:

The new CEO Tim Cook, appointed just minutes ago after Steve Jobs’ sudden resignation, has been at Apple since 1998 and has been a key player on the company’s road to success.

His now-outdated Apple bio says that as COO he was “responsible for all of the company’s worldwide sales and operations, including end-to-end management of Apple’s supply chain, sales activities, and service and support in all markets and countries.”

And like Jobs, he is evidently passionate and deeply familiar with Apple’s mission. Cook said this on an earnings call two years ago:

We believe that we’re on the face of the earth to make great products and that’s not changing. We’re constantly focusing on innovating. We believe in the simple, not the complex. … We believe in saying no to thousands of projects so that we can really focus on the few that are truly important and meaningful to us.

So Apple is in good hands, just as it was for periods during 2004 and 2009 when Cook was appointed temporary CEO during Jobs’ health-related leaves of absence.

Steve Jobs deserves recognition for remarkably turning Apple from a company in peril to the most profitable technology company in the world. Here’s hoping his resignation was not due to deteriorating health issues, although it very likely was.

The question is: Will Cook wear a black turtleneck and jeans on stage when he announces the iPhone 5 this October?