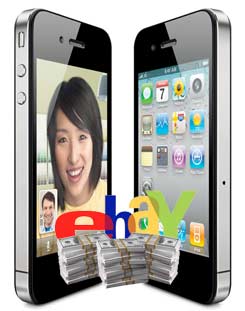 Will iPhone 4 be less likely to depreciate in value due to its front and rear glass, which is not as vulnerable to nicks and scratches as the metal or plastic that made up previous generation iPhones? If so, you may be able to sell your iPhone 4 on eBay for more than you would have earned selling past iPhones.

I have sold about six iPhones on eBay and have always been surprised at how much I am able to sell them for. I once sold an iPhone 3G on eBay for $415, close to what I paid for it new a year earlier. But the condition of the used iPhone affects how much you are able to sell it for. I suspect that my iPhone 3GS sold for considerably less precisely because it had some nicks and scratches on the back (which I described and photographed in my eBay listing).

For the same reason, I am guessing my iPhone 4 will sell for more, since after nearly a year it remains in near-mint condition. It was almost impossible to avoid damaging the rear side of previous iPhones. Either you went without an iPhone case and the back got scratched up from being placed on surfaces and mingling with keys or coins in your pocket, or debris got trapped inside your iPhone case and scratched up the back. There was almost no avoiding scratching the back of your previous iPhones. But the iPhone 4 is virtually immune to scratches due to the glass making up both sides of the phone.

Therefore, assuming you don’t crack your iPhone 4 glass, you may be in a position to get a good price for it on eBay. Just be weary of eBay iPhone scams.