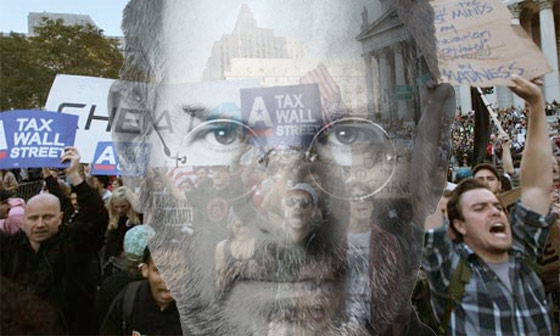 The death of Steve Jobs will be remembered as one of those “where were you when…” moments.

When the planes struck New York in 2001, I was in my eighth grade Spanish class. When Michael Jackson died, I was vacationing in Costa Rica during the break between my summer 2008 college courses. When Steve Jobs died last week, I was at The Midnight downtown for a “Green Drinks” event.

My intention is not to compare one person’s death to a tragic day in history, but simply to illustrate how memorable I believe Steve Jobs’ death will be, and how much of an impact he had on people.

I was stunned by the news, because I am one of the many who view Steve Jobs as a visionary person.

After the news, mildly tipsy after Green Drinks and perhaps over-emotional, I posted to Facebook that I was surprised to be this affected by the death “of a celebrity.” I said I wanted to live my life like Jobs, with passion and enthusiasm and a belief in the impossible.

Many of my Facebook friends posted similar statuses, quotes and articles about Steve Jobs.

Then some of my friends began calling out the Jobs grievers.

Mainly, the criticism was that you were a hypocrite if, like many people today, you supported the Occupy Wall Street movement against corporate greed, and yet you still publicly honored a “1 percenter” who ran a corporation of the same sort that people are rallying against. I disagree with this sentiment.

Yes, Apple as a corporation has engaged in some disturbing practices. Is their practice of employing cheap workers overseas admirable? Is it okay that a Foxconn worker in China committed suicide because he was harassed and accused of leaking a product design? No. But that doesn’t mean one can’t honor Steve Jobs as an individual.

Yes, he controlled lots of capital, but Steve Jobs also inspired many people, including me.

As someone with a desire to improve my ability to communicate effectively — English was an appropriate major for me — I am frequently inspired by Apple messaging and communication. I browse their website or go to the Apple Store and everything is so detailed and carefully thought-out. It’s a great customer experience, and it makes me think, “How can I learn from this experience and use it to communicate my own ideas more effectively? How can I take this simplicity and effective design and apply it to my website and business?” Steve Jobs and Apple have inspired me a lot in this regard.

Jobs was a radical thinker who revolutionized the computing industry. I heard an interview of his on NPR the morning after his death, and was deeply inspired by his ideas, his passion and his clear desire to make computing truly accessible to people by way of design.

It hadn’t occurred to me that we should NOT honor, or “glorify” Steve Jobs and instead call out those who grieved just because Jobs worked for the same type of corporation that the world is angry at these days.

I recognize Occupy Wall Street as a peaceful and compelling movement, but it should not motivate anyone to hate a person or deny others the solace to grieve for a dead person. The fact is Jobs had an impact on people’s lives, and the world grieved when he died.

When you die, what will matter will be what you left behind. I choose to remember Steve Jobs for the way he inspired the world, and the way I can learn from him to communicate my own ideas to my community and to the world. Not to mention Apple’s tools are fantastic instruments that assist creative people in doing meaningful work.

Yes, Steve Jobs may have made decisions that negatively affected people. These issues should not be ignored. But you are human, too.

And you and I will die one day, too. I hope that no one will judge us on the days of our funerals, but rather forgive us, remember our strengths, and wish our spirits well.

I stand behind the 99 percent. And I remain inspired by Steve Jobs, the designer, the marketer, the visionary.