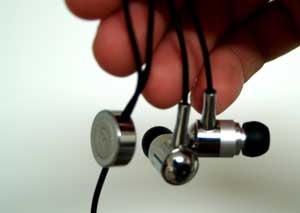 I’m listening to The Beatles’ Abbey Road on my iPhone right now, but I’m enjoying it more than usual because I’m using the iMetal Isolation Headset for iPhone that Maximo sent me.

I have to be honest: I’m not the best judge of these earphones because I’ve never owned an isolation headset before. I’d only briefly listened to isolation headphones one other time before first trying the Maximo ones a week ago.

The iMetal headset has a more bass-prominent sound, and you hear small details in music that you might have missed while you used lower-end ear buds. But is the Maximo headset worth $70?

iMetal headset worth the price?

I think if you can afford to pay $70, and you consider yourself a music lover, then you’ll appreciate the iMetal headphones compared to Apple’s or other standard earphones. 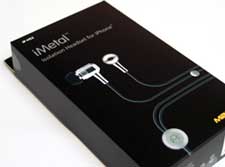 If you care more about singing along to the lyrics of songs than you care to listen to the songs themselves, then you might not consider these headphones essential.

Maximo’s iMetal isolation headset is iPhone-compatible, so you also get a clicker for pausing and switching songs, and a high-density condenser microphone for phone calls. And the 3.5mm headset jack fits right into the iPhone’s recessed headphone input, so you don’t need an adapter as you do with non-iPhone-compatible headphones.

This review of the iMetal Isolation Headset is based on my experience using lower-end earbuds, since I barely ever used isolation earphones before. I regret that I haven’t owned other isolation headsets, so that I could write a more informed review, but I’ll try my best to describe my experience using Maximo’s iMetal Headset anyway.

When music is produced in the studio, instruments are panned left, right and center depending on the tastes of the producers. So when you listen to music on headphones, the different sounds come from different earbuds, L and R. 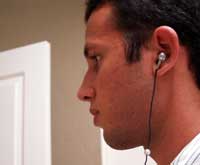 With Apple’s white ear buds, I notice the panning for the main instruments in the mix. But as I review the iMetal headset, certain background sounds that never stood out to me before become more prominent, and everything has its place in the mix.

Take a drum set, for example. If you are a drummer, you have some drums and cymbals to the left of you, some to the right and some in front of you. With iMetal’s Isolation Headset, you can be the drummer and identify where each drum sits in the space.

Bass stands out more than typical earbuds on the iMetal earphones. And so do higher-pitch sounds. That’s because, while the Apple earbuds have a frequency response of 20-20,000 Hz, the Maximo iMetal isolation headset’s frequency response is 18-22,000 Hz.

And because these earphones prevent you from hearing external sounds in your environment, the iMetal headset can get LOUD.

Besides the improved audio quality, a big perk for me about the iMetal headphones is that you don’t have to play the music as loud because the rubber tips on the earphones block outside noise from entering your ear canal. This is called sound isolation.

Note: This is different from noise-canceling earphones, which use a battery to electrically reduce the noise signal.

Noise-cancelling headphones use electronic circuitry to remove noise after it has entered the headphone earcup. Microphones inside each headphone earcup sample the noise field, and an electronic circuit creates an inverse or mirror-image of the noise signal and adds it to the music. The actual noise and the inverse noise cancel each other out. The microphones and circuitry require batteries in order to operate.

Since I read in the Washington Post that listening to loud music with headphones puts you at greater risk of hearing damage, I’ve never been much of an earphone user.

But the thing about this iMetal headset is that, because it blocks outside noise from entering your ear canal, the same decibel level (i.e. volume) that sounds weak on normal earphones sounds louder on the iMetal earphones.

So if you care about your hearing, here’s what I suggest if you ever get yourself sound isolating earphones:

After you’ve done that, you’ll be listening to your iPhone at the same volume you always did, but it will actually be at a lower decibel level than it sounds, because the music just seems louder since it is blocked from outside noise and pointed right into your ear.

As far as isolation goes, if you have the iMetal iPhone headset turned up all the way and you have some “busy” music playing, you would just barely hear someone clapping right in front of you. Whereas, when I used the standard iPhone earbuds after using the Maximo ones, I realized how little they isolate anything. With the Apple ear buds, you could hear a paper ruffle — seriously.

If you buy isolation earphones and then switch back to your white earbuds, you will laugh at how weak they seem in comparison.

Unlike with the Apple ear buds, the clicker (or “music-skip feature,” as Maximo calls it) on the iMetal Isolation Headset is not located alongside the microphone. Instead, it’s a small button where the left headset cable meets the right one.

During music playback, the clicker can be pressed once to pause, or double-clicked twice to switch to the next song. The double-click time is a little bit faster on the iMetal Isolation Headset compared to standard iPhone earphones.

The headset’s microphone is a small, silver pearl on the left cable that hangs just below my chin. It would be nice if this microphone was a little higher up on the cable. I guess long-faced people might appreciate it more the way it is. 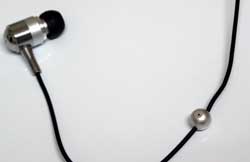 I would have much preferred for the iMetal headset microphone to be placed on the right cable, as it is on the Apple iPhone earphones. Maybe that’s because that’s what I’m used to, or maybe it’s the bias of a right-handed person, I don’t know.

It is, however, distinctly more clear than the standard iPhone earphones’ microphone. A test I did showed that the high-density condenser used in Maximo’s headset actually makes a difference in the sound quality of the speaker’s voice.

When I first put the ear phones in my ears, I didn’t realize that you had to really press them in to get them inside your ear canal. If you’re not used to earphones with tips like these, placing the iMetal isolation headset in your ear incorrectly will make you wonder why the heck you just wasted $70. But then, as I did, you will realize that you have to press them in and then you’ll see what isolation headsets are all about.

If you’re not used to it, it might feel strange at first to have these earphones so tightly secured in your ear, but you get accustomed to them and you start to feel like you’re in your own secluded little space.

After a while, you’ll feel so comfortable with them on that you might even forget you have them on, as the Woot! blog points out about another Maximo isolation headset:

Your ears will go: “Hey, iM-490s, I’m glad we have the kind of friendship where we can just hang out together and we don’t even have to have music or talking or anything; we can just chill and it’s not weird.”

Maximo provides spare rubber tips in two other sizes, so you can choose the ones that fit best. The middle size fit me best.

One great thing about the rubber eartips is that you can take them off and wash them if, for example, you want to lend your ear phones to someone and you decide to be kind. Maximo doesn’t specify in the User Guide that you can do this, but I’m sure it would be fine. 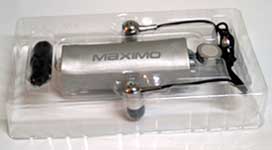 Since the tips actually go in your ear canal, the more hygienic of your friends and family may feel uncomfortable sharing this headset otherwise.

The iMetal Isolation Headset also comes with a stylish silver bag for stowing your headphones when not in use, and an extension cable if you want to lengthen your headset for whatever reason.

I couldn’t tell you how other isolation headsets perform, but based on my experience using the iMetal Isolation Headset for iPhone, I would recommend this product if you’re looking for a good pair of headphones for your iPhone.

Maximo has also done a great job with the iMetal Headset packaging, and you get a bunch of useful accessories for this fully-iPhone-compatible headset. Unboxing the iMetal headphones was almost as fun as unboxing a new iPhone — of course, I’m exaggerating.

I’ve also tested Maximo’s iMetal Stereo Headset for iPhone, which does not isolate the sound as the other earphones do.

The iMetal stereo headset has a wider frequency range than the standard iPhone earbuds but the sound quality, to my ears, was only slightly improved, and the volume was the same.

The stereo headset also has a clicker for skipping songs, a microphone for phone calls, and it comes with the same accessories as the iMetal isolation headset.

The iMetal stereo headset is priced equal to the iMetal Isolation Headset. While I think $70 for the isolation earphones is reasonable, I would not pay that price for the stereo headset, which does not provide enough of a difference in quality to merit such a premium.

If you’ve got $70 and you’re looking for a better headset, go with the iMetal Isolation Headset for iPhone, not these. 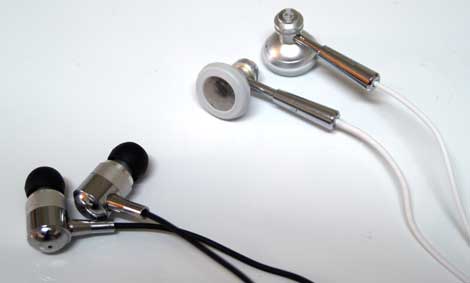