I don’t care much for complicated role playing games that require you to complete missions and figure stuff out. Some of the best iPhone games are those single-purpose, mindless games that are challenging yet don’t require much thought.

I have too many things to deal with in my real life that I don’t want to have to worry about the tasks and stresses of some RPG character, too! Give me a simple game that I can play to take my mind off things every now and then, and I am a happy camper.

Here are seven simple and sweet iPhone apps that satisfy my small, but gnawing appetite for games.

Do you play games on your iPhone or iPod Touch? What are your favorite games in the App Store? Let me know your opinion in the comments. 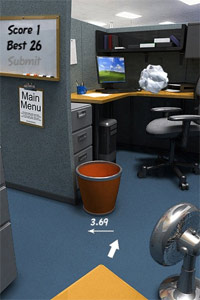 I’m not big on games in general, but I discovered a fun iPhone game with a simple concept yesterday: it’s called Paper Toss.

To try to beat the high score, you toss the paper into the waste basket as many consecutive times as possible. A missed shot resets the score ticker to 0.

It’s a fun little time-waster, so I thought I would share.

Paper Toss can be downloaded for free from the App Store. There are three levels — Easy, Medium and Hard.

Here is a video of my friend playing it on the 4th of July — you can hear fireworks in the background. If you’re easily offended, ignore his frustrated profanity at the end of the video when he fails to match my high score.