Garr Reynolds of Presentation Zen wrote a great article on Cingular CEO Stan Sigman’s horrific presentation during the Apple iPhone keynote (Sigman is introduced 5:15 into the video). Reynolds highlights the difference between Sigman and Steve Jobs, and shows us why presentation matters:

Most Apple customers did not know who Stan Sigman was before Tuesday. Now they know, and the first impression was not a great one. The difference in communication styles between the two CEOs is indeed worlds apart. 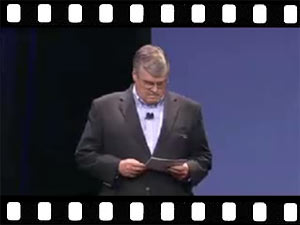 The thing is… when Sigman first walked out, he seemed like a more or less personable guy. But as soon as he took out his note cards – a blogger at DC-Connect said, “It’s probably the lawyers that told him he needed to say every word in that order.” – the keynote headed downhill. Reynolds accurately described it in his article as “a seven-minute snoozefest.”

I wonder how successful Apple would be if Steve Jobs talked—or read to—his audience like that (even if Apple did everything else the same).