Update: This was an April Fools joke. Sorry to offend the sensitive. 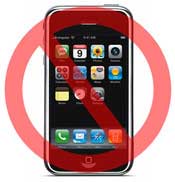 iPhone owners in the United States may have their devices recalled come June due to a Federal Communications Commission ban on the iPhone, which is reportedly in violation of the National Environmental Policy Act requiring mobile devices to comply with a cap on dangerous radiofrequency energy emissions.

An FCC investigation found that the iPhone emits a “substantial level of RF energy, well in excess of what federal regulations allow,” according to the FCC report.

The Food & Drug Administration illustrates the potential health risks of radiofrequency emissions: “Large amounts of RF energy can heat tissue — two areas of the body, the eyes and the testes, are particularly vulnerable to RF heating because there is relatively little blood flow in them to carry away excess heat.”

“This is a public health issue as well as an environmental one,” said FCC chairman Kevin J. Martin. “We have no choice but to forbid further sales of the iPhone until Apple upgrades the device’s hardware to comply with federal law.”

In an open letter, Steve Jobs apologized and said Apple is “doing all that we can to expedite the process of upgrading the iPhone hardware and getting it shipped out to iPhone owners as soon as possible.”

To make up for the inconvenience, Apple will grant all iPhone customers a $100 Apple Store credit, just like they did last September after dropping the iPhone price.

What you can do

Because it might not be feasible for Apple to roll out the new iPhones in time to meet the June deadline, click here to petition the FCC to extend the deadline.

If you have a blog, please link to this article to spread the word about the petition so that we iPhone owners are not left without phones while the transition to a safer iPhone takes place.

To be notified of updates to this story, be sure and subscribe to this blog.

Update: A number of you posted comments guessing this was an April Fools joke. Unfortunately, your comments disappeared after the server at my webhost crashed. Sorry about that.

But you guessed right — clue: see the “click here to petition the FCC” link above.

4 thoughts on “BREAKING: FCC to Issue iPhone Ban in the US [April Fools]”