Wired.com reported yesterday that “despite its minimal camera features, the iPhone has just surpassed Canon’s Digital Rebel XTi as the most popular camera” on Flickr.

Amazing, but not surprising. iPhone’s portability and constant connection to the web make it an ideal tool for photo sharing. That’s not to say the device has littered Flickr with a bunch of crappy photographs, though. In fact, the iPhone can capture some pretty great shots, which is why today I’ve decided to highlight these 16 beautiful iPhone photos that have been shared on Flickr:

Note: I have posted these images here to honor the work of great photographers, not to steal it. I include a credit and a link above all of the photos below, but if you are the photographer and you object to having your work displayed here, please contact me on Flickr and I will happily remove your photo.

Some of these iPhone photos have been digitally edited, but they are impressive nonetheless. Have you taken any good snapshots with your iPhone camera? Or have you seen iPhone photos on Flickr that really caught your eye? Please share in the comments. 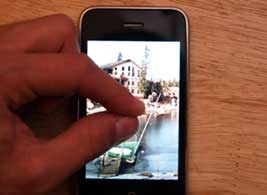 Cropping photos on the iPhone is easier than you think. You can crop photos on your iPhone in a matter of seconds without having to download any apps.

Your cropped photo will now appear in your photo album.